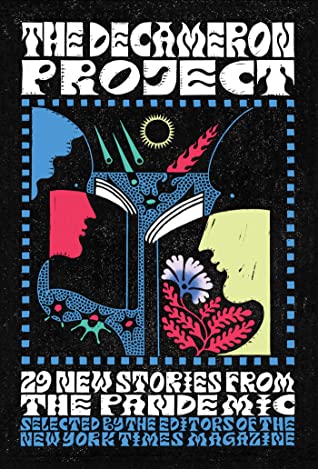 Adrift for a Moment: A Proletarian Reading of The Decameron Project

In my first year of my MFA program, our faculty invited Olga Tokarczuk and her English translator, Jennifer Croft, to speak at our visiting writer series. Out of the duration of her lecture and master class, the one thing that still resonates with me on a daily basis is what I managed to capture in my notebook while Tokarczuk described the form of short narrative fragments that made up her novel Flights:

[from my written translation during note-taking] “When you live in the changing borderlands of a continent such as Europe &/ Asia, it is near impossible to fathom the novel as a thing you can sit down and consume within one prolonged moment. Such a moment does not exist in our landscape. We must read when we can, absorb literature in the small pockets of time afforded when we move ourselves from one place to another, be it for travel, commute, or a darker kind of displacement.”

So what happens when the physical act of displacement that we afford ourselves becomes restricted in the wake of, say, a global pandemic?

The premise behind the New York Times Magazine‘s series of short fiction written in the wake of the COVID-19 pandemic’s first critical American wave in New York City calls upon acknowledging the frame’s historical context while bringing to the modern reader a new contribution to the world of fiction.

The Decameron Project is a nod to 14th century writer Giovanni Boccaccio’s collection called The Decameron (trans. “Ten Days’ Work”), a series of stories narrated by a fictional cast of characters who’ve locked themselves away for a fortnight in a villa just outside Florence and wait out the Black Plague in comfortable seclusion. To pass the time, the ten characters each tell a story every night, for a remarkable feat of a hundred stories told in the span of ten days (the remaining two days left for religious observation or personal matters).

Many of these stories are modern (read: 14th-century) renditions of previous tales, and the frame of the content itself indicates how Boccaccio manipulates the form of allegory and lesson-learning commonly used in folk tales to satirize the very sociopolitical moment.

While The Decameron Project does not manage the feat of telling a hundred stories (instead managing an impactful 29 with a handful of works in translation) in response to the current pandemic and the very flawed political system the virus made glaringly apparent to the society at large, it accomplishes something that Tokarczuk alluded to when she described the form of her own fiction.

The brevity of The Decameron Project‘s stories—each one no longer than 1,500 words—invites the reader to entertain the temptation of escaping our lived reality just long enough for our mental absence to be considered socially excusable. All this year, I’ve had a difficult time allowing myself to read fiction. As a consequence of remaining constantly tuned into the world’s daily declaration of injustices while also navigating a 700-square-foot space that I’ve had to mentally compartmentalize when I cannot afford to physically do so, I’m no longer the voracious reader I used to be. If I pick up a thick novel from my bookshelf, I feel as if I’m betraying my own existence. How dare I take part in the luxury of escaping my own reality when there are others that exist around me who cannot afford such a privilege? How can I devote my attention to worlds that aren’t even real when the very real world around me is begging for me to pay attention to it above all, always?

Rivka Galchen, the writer who first pitched the concept of The Decameron Project to The New York Times Magazine, referred to the form of the Project according to the root word of the term “novel” (the dual meaning of “new” and “news” as derived from the Latin term novella):

The tales of “The Decameron” are the news in a form the listeners can follow.

Here we have a culmination of fiction (novella, or “short novel”) that manages to encapsulate the very duality of our daily existence—our ability to both exist in our current reality while indulging in a world constructed for our momentary escape.

The Decameron Project is another modern example of storytelling crafted for consumption among the working class, a readership craving rest and a temporary indulgence from reality without completely untethering themselves from the present moment. The Project‘s first rendition appeared online—in fact, you can read all 29 stories for free on The New York Times Magazine website. It is a series meant to be viewed and interacted with in its compact digital form, which is something that was made very clear to me after reading through the physical copy I received prior to taking in the Project‘s beautiful digital life. What registered as a content moment of escape through the printed word for, say, Margaret Atwood‘s almost metafictional story-within-a-story of a glorified alien babysitter whose mission is to make the time pass for humans in quarantine, or Charles Yu‘s approach to understanding the social condition during the pandemic through Google search algorithms, were made more immersive with their mesmerizing illustrative states in their virtual form. I can touch the letters and the artwork without the fear of smearing away the ink and engage with the text in ways I wasn’t able to with my physical copy. Perhaps, now that I’m adjusting to this more-digital world thanks to online-only classes and virtual readings and remote work from home, this is the terrain where book publishing needs to give more than a cursory second glance at how it reaches a more perpetually present readership.

The Decameron Project is by no means flawless. This collection hit-or-miss short fiction either provides just enough satire to provoke a few more minutes of sitting with the piece before moving on to a passable reflection of the experiences we have already told ourselves; not to mention the stories that linger lightly on subjects of civil unrest without really pressing a heavy finger on the pulse of our society’s injustices. Rather, the Project has done something almost as restorative as we move towards reinventing the publishing industry at large: it has made the realm of narrative fiction a privilege affordable for us all.