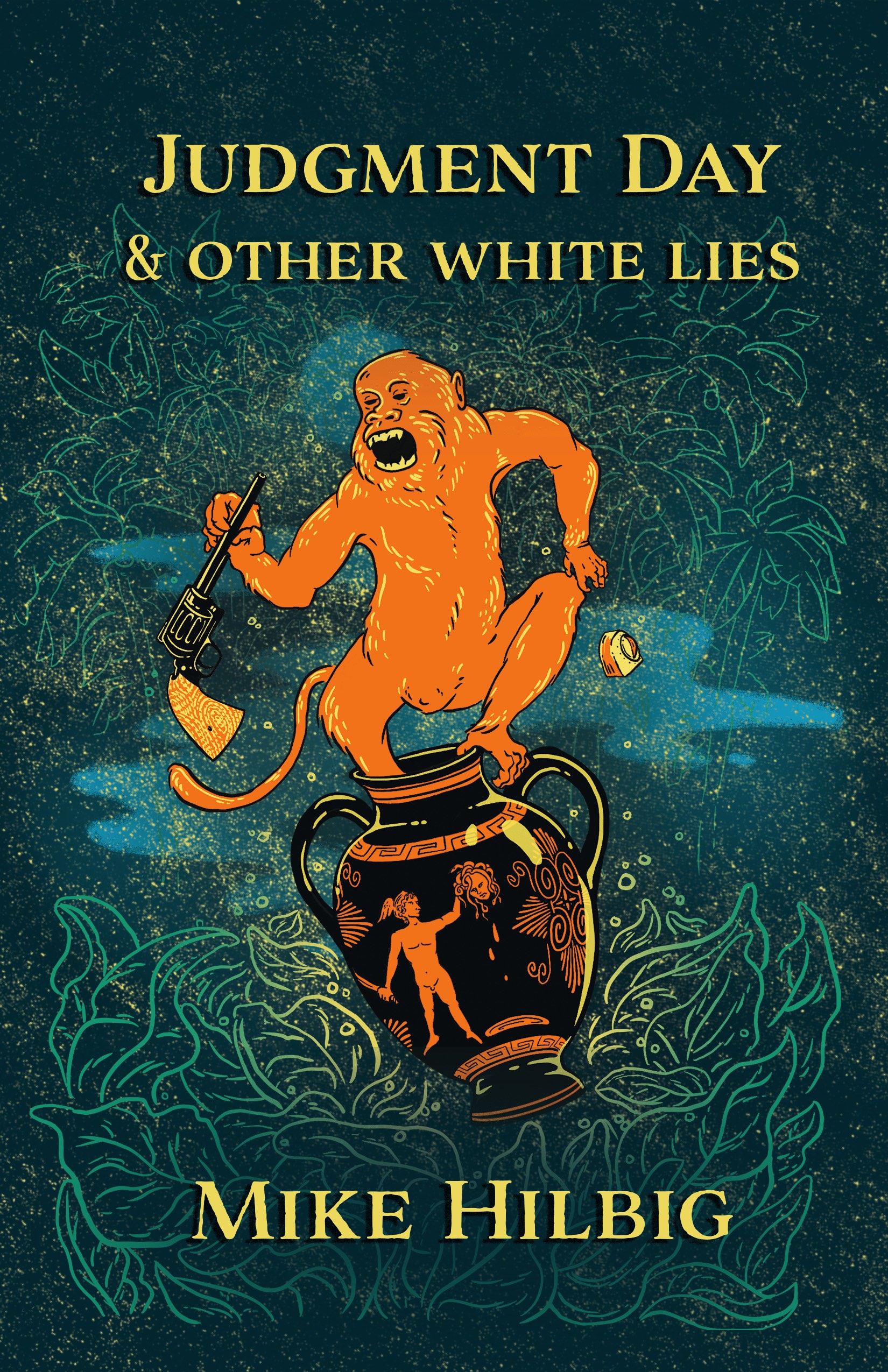 A sharp-edged collected fiction on American values that blends the certainty of mythology with the horrors of distorted revisionist history.

Judgment Day takes the shape of seven stories ranging in form, reality, and aspects of Greek mythology to illustrate how tragedy becomes desensitized for our cast of narrators and contributing witnesses.

Some stories here use the traditional first and third person narrative structure, following the down-and-out white male narrators of Houston, Texas, who imbue upon themselves the names of tragic figures in Greek mythology in what are revealed to be, for the most part, aspirational acts of self-care in a world that has otherwise abandoned them.

An academic research paper on a street artist’s mesmerizing control over an unconsenting audience includes a slew of David Foster Wallace-esque endnotes that tell a completely different story. A transcription of a psychologist’s conversations with a patient reveal the side effects of a hallucinogenic trip where he spends his time chasing after a life that feels more real than his current one. There is also a poem that longs for a world lost to the onslaught of Fake News and climate change from the perspective of Orpheus, if you are prose-averse.

Hilbig’s more politically-oriented stories such as “The Ballgame at Xibalba” and “The Bell Witch Hunter & the Curse of Jacksonian History” are his stronger pieces, where he leans into the realm of satire with precision. An underground basketball tournament run by high-profile politicians and celebrities pits desperate Black characters against each other for a fatal opportunity to kickstart a nest-egg of intergenerational wealth. “The Bell Witch” tells us in so much as a sentence how our society came to completely erase and remake our own history after the year 1820 in favor of Andrew Jackson’s preferred account.

The shock of reading the alternative histories in Judgment Day hits hard at a time when the American public school system is encouraged by right-wing spokesmen to ban teaching critical race theory and books on Black, queer, indigenous, and otherwise marginalized versions of American history that are omitted from standardized textbooks. Hard facts are hard to find in Judgment Day, but Hilbig suggests that may be the whole point. What can we do when we no longer know what the truth looks like?

For fans of the outrageously honest 2022 film Don’t Look Up, Hilbig’s Judgment Day is an exercise to American readers—and white folk in particular—to challenge the truth told by each and every narrator, from one lived reality to the next.

This review was originally published on Reedsy Discovery, a book-sharing platform where book reviewers gain early access to new titles in independent publishing. If you want to become a reviewer, apply here.

The Life-Changing Manga of Tidying Up: A Magical Story
by Marie Kondō

Judgment Day & Other White Lies
by Mike Hilbig
Disclaimer: I received an Advanced Review Copy (ARC) from Reedsy Discovery to review before publication. A sharp-edged collected fiction on American values that blends the certainty of mythology with the horrors of distorted revisionist...

The Sea of Monsters
by Rick Riordan
What I love about this series so far (disclaimer: this is my first time reading PJO, thanks to the read-along podcast The Newest Olympian) is its reliving of classic Greek tales with this new group of demigods. In this book, we get ret...

Several People Are Typing
by Calvin Kasulke
4.5 / What happens when you cross a love story with a bizarre tech bug that possesses your corporeal body and traps your consciousness in your office’s messenger app? Short answer: you’d get this book. I was intrigued by the gimmick of ...