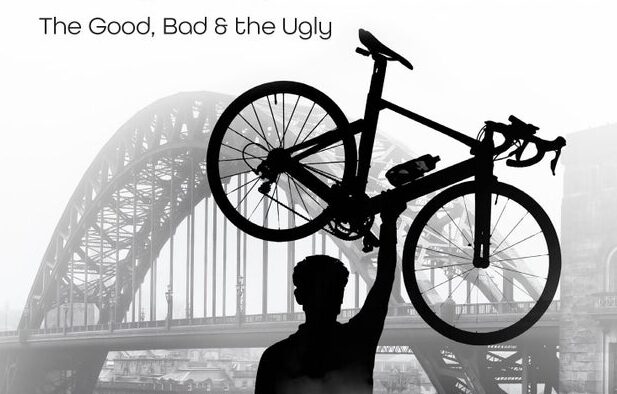 Book Review: The dying breed of the cycling courier

“You’ve Got the Gig!” shares what life really looks like when you push your body to the limits to survive in the gig economy.

You’ve Got the Gig!: 100,000 Miles as a Cycle courier in the Gig Economy chronicles the span of Ryan Murphy’s tenure as a cycling courier for Deliveroo in England. His origin story begins with a chance encounter of a man riding his bike up a hill in San Francisco (an inevitable meet-cute). In sharing their love language of cycling, Murphy learns that his fellow uphill partner gets paid to bike for a living as a food courier. Upon returning to England and beginning his master’s degree, Murphy takes this chance encounter to heart and finds a part-time job as a cycling courier for a new start-up called Deliveroo.

Much like the uphill climb, Murphy paints a detailed and suspenseful portrait of life as a Deliveroo courier from its early founding days up to the pandemic. Broken up into sections titled “The Good,” “The Bad,” and “The Ugly,” Murphy shows us that the good experiences working as a cyclist in the gig economy ultimately triumph over the bad. The good: the physical health benefits of cycling in the great outdoors, the choose-your-own schedule, the lower blood pressure levels that come with having no boss to tower over you all the time.

Like any other dream job, the good aspects of the gig begin to lose their luster over time, revealing more of the rough underbelly of the beast that is working as a contractor in the gig economy. We begin to see the machinations of the gig hustle when Murphy takes some time away from the job and he loses the privileges of his coveted high-ranking status. Other incidents in the book remind Murphy (and the reader) of the critical downfalls of pursuing what you love without the safety net that a stable desk job might offer: health insurance (especially in the US), paid time off, worker’s comp, job security, sick days, holidays (work? on Christmas Day? no thanks). Murphy also portrays the evolution of the rules of the gig over the years as the company struggles to balance a system of supply and demand, cutting delivery fees and stifling living wages, and wringing their contracted staff dry to beat the competition.

What pulls Murphy through all this is the true passion of being on the bike—that childlike joy of freedom and being in closer touch with nature that you don’t quite get when you’re sitting in a car in heavy traffic or at a cramped cubicle desk and you need to stretch your legs.

I read hungrily through his depictions of cycling in all seasons and in two different English climates, thinking to myself, “there’s gotta be something horrible that happens next.” Murphy certainly knows how to keep readers on the edge of their saddles demanding more. You’ve Got the Gig! is a go-to guide for cyclists who have always wondered what life would be like if they turned their hobby into a hustle, and doesn’t hold back on sharing the perks of the gig alongside the crashes and burns of working fifty hours a week in the saddle.

This review was originally published on Reedsy Discovery, a book-sharing platform where book reviewers gain early access to new titles in independent publishing. If you want to become a reviewer, apply here.