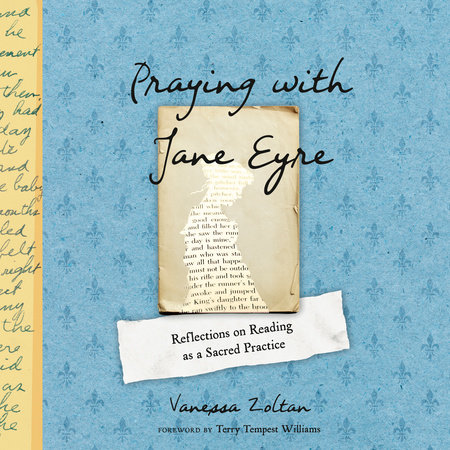 On reading Praying with Jane Eyre as a sacred text.

Have you ever read or owned a book—or series—that, when the weather hits just right, or the anniversary of when this book first meant something more to you looms near, you pick up for the hundredth time in its lifespan on your shelf and, with a little adjusting of the pillows and blankets and mugs of tea splayed out around you for easy access, you dive right back into its magical world with a deep fondness, a heartfelt nostalgia, that no other book can recreate? Now, think about this book. Would you consider it to be your “sacred text?”

That’s what Vanessa Zoltan aims to clarify in her book, Praying with Jane Eyre. Vanessa Zoltan identifies herself as an “atheist chaplain”—in the introduction and first few chapters of this book, she details her upbringing in a Jewish family with grandparents who have survived the Holocaust, her journey through divinity school to become a chaplain, and her ultimate disassociation from sacred religious texts and religion’s inability to answer for the crimes and suffering against humanity such as genocide, homelessness and displacement, racism, unfettered capitalism, and the abuse of women and trans folks.

However, Zoltan isn’t teaching us to read and reaffirm our faith with the sacred texts of religion (the Bible, the Torah, the Qur’an…). Rather, she is teaching us how to treat the literature we read and reread and hold close to hearts as sacred texts themselves. Zoltan teaches us that, by treating a book we hold close to us as sacred, we move closer to learning “how to get better at treating [our] fellow humans as sacred” (49).

In her chapter “On Resentment,” Zoltan contextualizes empathy not as a value, but as a practice, from the philosophy of Saint Teresa Benedicta (formerly Edith Stein). In treating it like a practice, a series of realization and action, we are exercising empathy to strengthen our ability to more intimately understand “others’ spiritual realities and our own.”

More simply: You are putting yourself in someone else’s shoes, but seeing their world with your own eyes.

Zoltan reminds us that we can still learn something about ourselves and others through the characters we have read and studied, and move into embodying the values we have extracted from the passages we have spent time with again and again. We can learn about our commitment to life and living from Jane Eyre, about hope Harry Potter, about obsession from Gatsby, about the power of women’s anger from Bertha Mason. The best place to begin this route to a more practical approach to empathy is to read through a passage and piece together the commonalities, both on the page and off it, one by one until they form a thematic bridge of humanist values from Jane’s or Harry’s or Gatsby’s world to ours.

Curious to learn more about the practice of the sacred text? Vanessa has a podcast that does just that with the entire Harry Potter series. Check it out here.

Welcome! Looking to buy any of the books you seen here, but you're not a fan of Amazon?

Now that Bookshop exists and supports independent bookstores across the US, we now have a more efficient way to buy the books we love while at the same time supporting the bookstores we love.

Check out my shopfront below for some book lists inspired by this blog!